History of the Salish Woolly Dog

Humans have long had close relationships with our dogs: as companions, hunting partners, or sometimes food. The first dogs are thought to have been domesticated over 14, 000 years ago. However, one of the most unique humane/canine relationships was between the Coast Salish peoples and the woolly dog. Prior to first contact, the Coat Salish kept several types of dogs. Some dogs were used for hunting, but others were kept for their wool. These woolly dogs were a small breed unique to Coast Salish territory. They were kept sheared like sheep, their wool spun into yarn, and then woven into blankets.

When the first Europeans arrived in Coast Salish territory many of them took note of these woolly dogs. Most described the dogs as having very long fine white hair. Since the woolly dog hair was a recessive trait, they were kept isolated from other dogs to prevent interbreeding. In at least one case the dogs were kept on a small island a few miles from the coast. 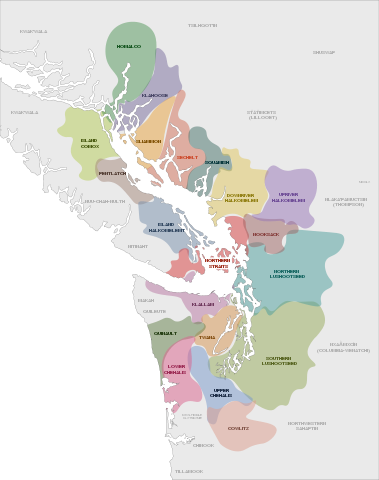 Linguistic map of the Coast Salish people from the early to mid 1800s. Click to enlarge. Map created by Noahedits, CC BY-SA 4.0 , via Wikimedia Commons.

“On a little island a few miles from the coast they have a great number of white dogs which they feed regularly every day. From the wool of their dogs and the fibers of the Cypress they make a very strong blanket.” -Dr. John Scouler, 1918 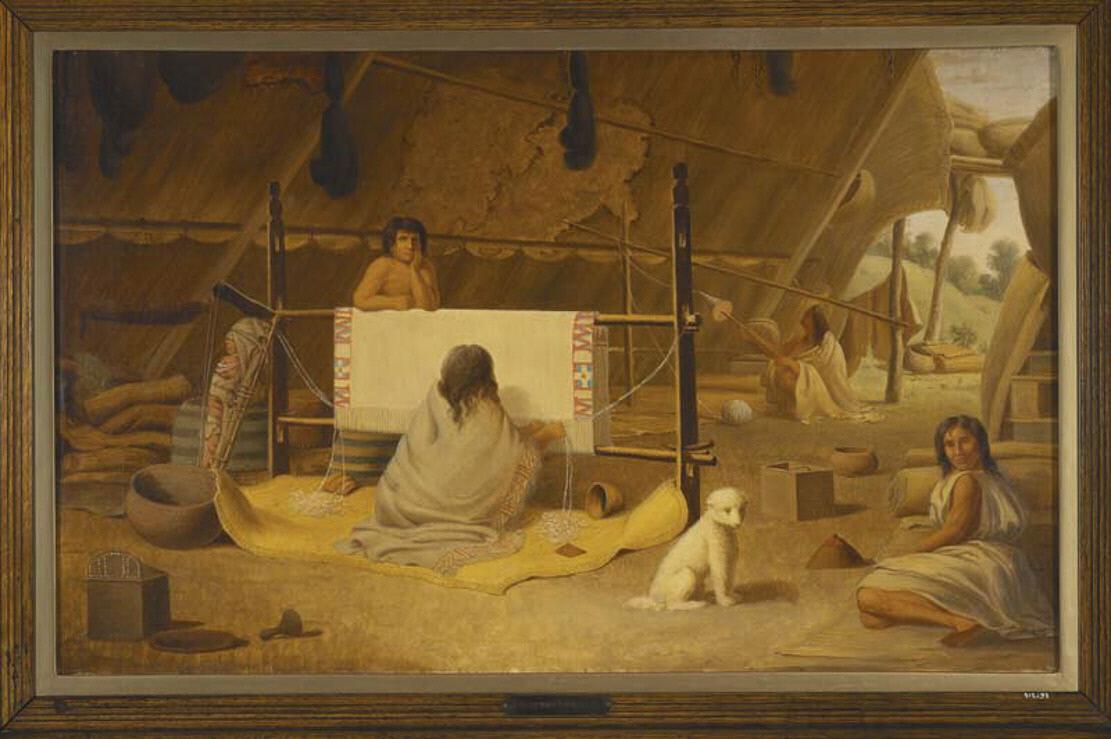 Painting of several Coast Salish people and a woolly dog inside a plank house, by Paul Kane ca. 1855.  Royal Ontario Museum, object no. 912.1.93.

The woolly dogs often slept in plank houses with people and they were fed a nutrient rich diet to maintain the quality of their coats.

The Irish artist Paul Kane did a series of sketches of the Leukwungen and W̱SÁNEĆ people of Vancouver Island and their woolly dogs in 1847. His most well known piece depicts a woolly dog inside a plank house next to a woman doing a traditional blanket weaving. The dog in this painting is small, white, and fluffy.

However, this painting wasn’t complete until nearly ten years after his original sketches were taken. Therefore, many people think his earlier sketches are more accurate.

The use of dog hair as wool is unique to the Coast Salish peoples. There is evidence of it seen in neighbouring communities such as the Makah people of the Olympic Peninsula, but some think it was introduced to them by the Coast Salish.

Weaving blankets was and continues to be an important part of Coast Salish life. In times past it was integral to the economic system. Spinning wool and weaving traditional blankets is a very labour intensive task.  Therefore, the blankets had a high value and were a sign of great wealth.  In addition to their functional purposes, these woolly dog blankets also had many ceremonial uses and they were often given away at potlatches.   They were used at marriages, funerals and as body wrappings after death.  These blankets- like the ones woven today- were made not only to protect the wearer from the cold, but also to protect their spirit.

When Sḵwx̱wú7mesh (Squamish) Chief Joe Capilano (Sa7plek) travelled to England in 1906, accompanied by a Kwikwetlem interpreter named August, to meet with King George VII he wore a blanket made of a mixture of goat and woolly dog fur.  The blanket was infused with the prayers of its weavers to protect both his body and spirit.  Today this blanket can be found in the Canadian Museum of History in Gatineau, Quebec. 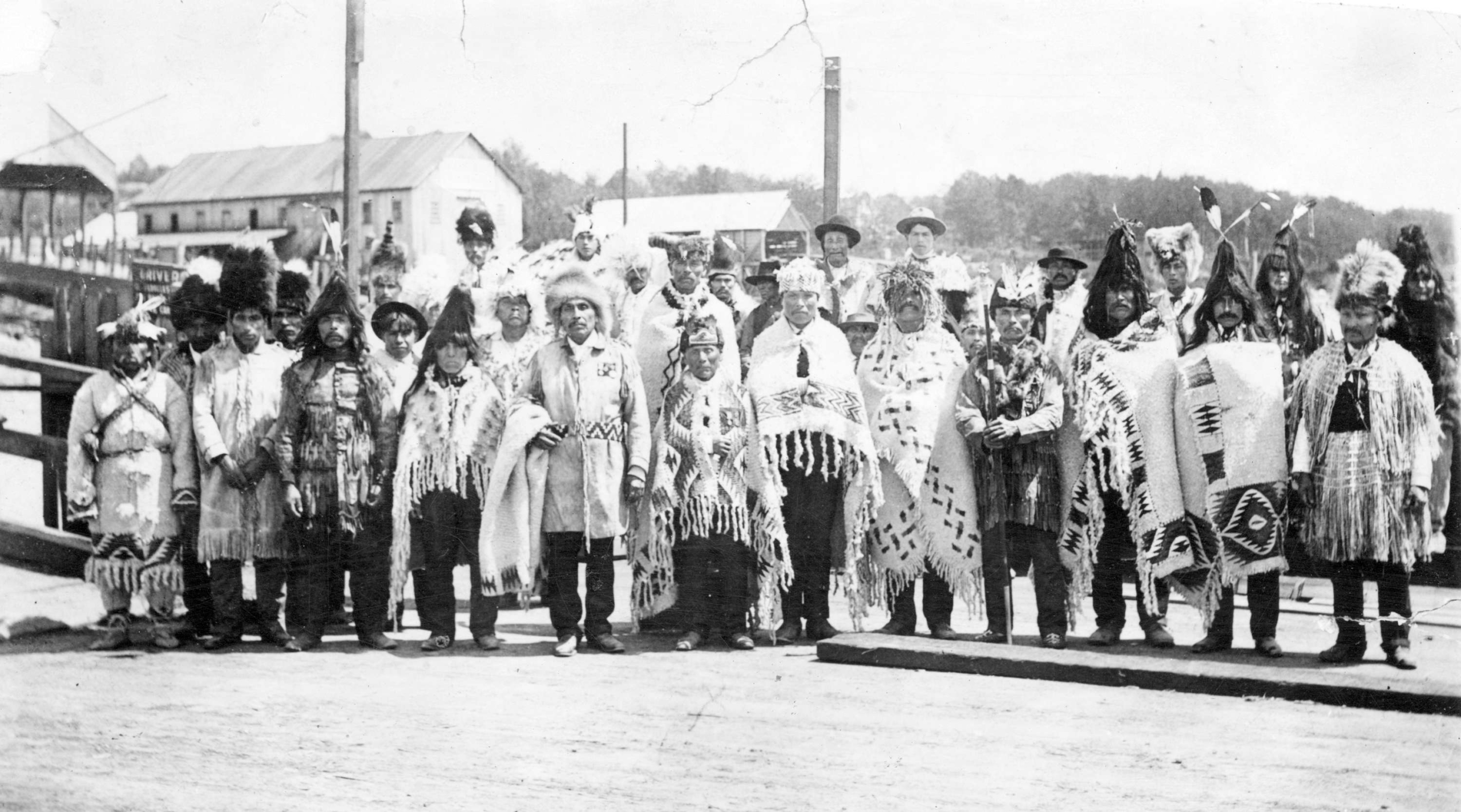 Chief Joe Capilano (center-left) can be seen here holding the blanket woven for his journey.  Photo courtesy of the Vancouver Archives.

“The wool regalia offers protection from the elements.  It also offers spiritual protection.  That is a teaching that has been handed down from the beginning of time” -Chief Janice George (Chepximiya Siyam)

Tragically, as European influence increased in the Pacific Northwest the woolly dog population and the weaving of Salish blankets declined.  By the end of the 19th century this once abundant dog became extinct.

Today there is little physical evidence left of the woolly dog.  Due to the short life span of textiles, most blankets from this time period have been lost.  In fact, despite the numerous oral histories of the woolly dog provided by the Coast Salish peoples, some scholars had begun to question the use of woolly dog fur in blanket weaving.   However, recent examinations of Salish blankets held at the Smithsonian Institute were able to show that the physical evidence of woolly dogs had been there all along.

“…[The Coast Salish people] appear to have lost the art of weaving these blankets, the blankets themselves were very scarce and difficult to obtain, and the wonderful dog had become almost extinct” -Fredrick Howay, 1918 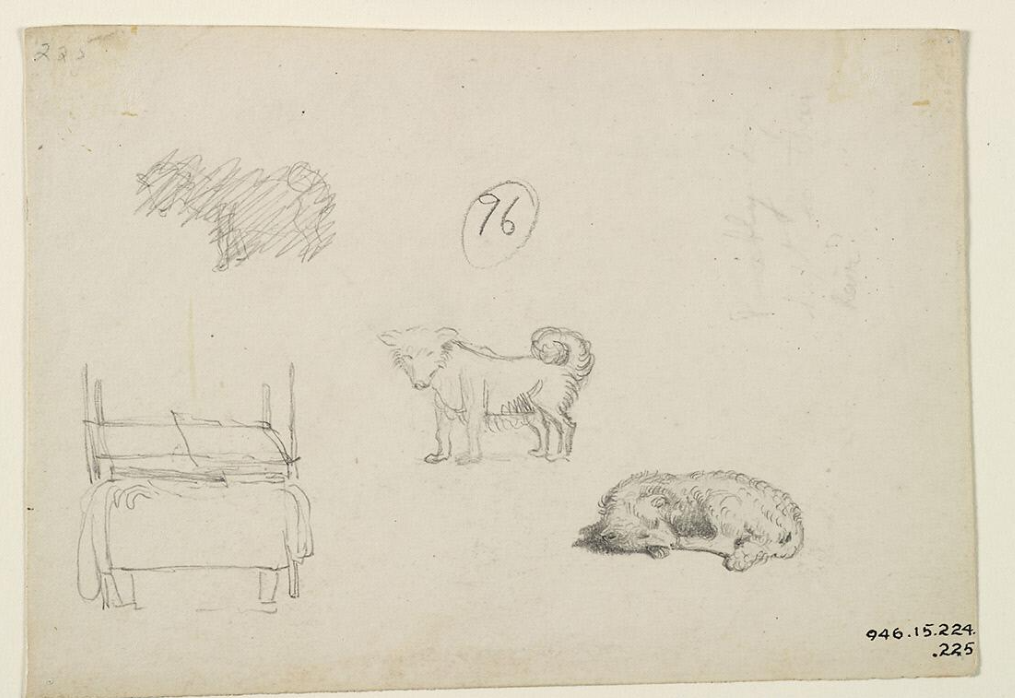 Sketch of a woolly dog, by Paul Kane, 1848.  This sketch is thought to be a more accurate representation of the woolly dog than his later painting.  Royal Ontario Museum, object no. 946.15.225. 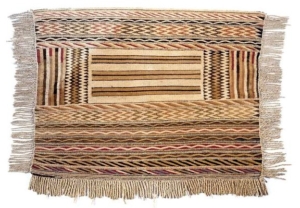 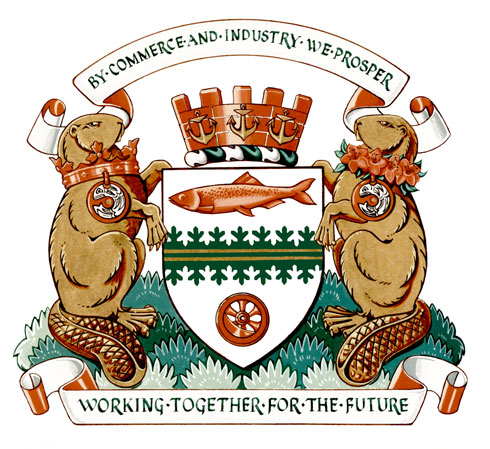 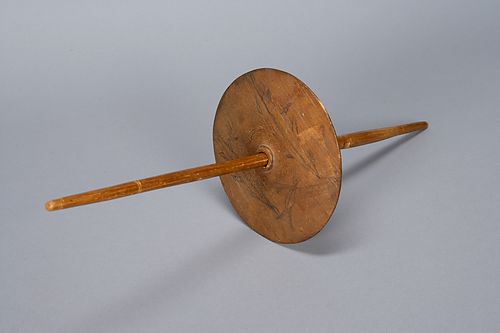 Photo of wooden whorl and stick used to spin fleece into yarn, made by the Quw’utsun’ people.  Museum of Anthropology, object no. A17028 a-b.

Weaving was traditionally done by women on a large upright loom similar to the one depicted by Paul Keane in his famous painting.  The loom consists of two bars with yarn wrapped lengthwise between them.  The upright static yarn is known as the ‘warp.’  The ‘weft’ is then be woven horizontally through the warp to create the body and pattern.

Before anything can be woven on the loom, the animal fur first needed to be spun into yarn. A tool called a “spindle whorl” is used for this.  The whorl is a circular disk with a hole through the middle where the stick is inserted.  Coast Salish whorls usually have carvings on them which would spin as the whorl was turned.  This spindle whorl is unique to the Coast Salish.  Unlike other spindles, theirs was traditionally quite large and would be held upright.

Even in the face of horrific colonial policies aimed at the destruction of Indigenous culture, heritage, language, and traditions, there has been a strong resurgence and revitalization of weaving across Coast Salish territories.

In the 1960s two Stó:lō women, Mary Peters and Adeline Lorensetto, sought to recreate traditional Salish blankets.  They built looms based on descriptions found in books and their childhood memories.  In they early 1970s they founded the Salish Weavers Guild.  Their work can still be seen in the Museum of Anthropology, Royal BC Museum and the Canadian Museum of History.

In the 1980s Wendy Grant-John, a xʷməθkʷəy̓əm (Musqueam) woman, spearheaded a movement to teach traditional weaving techniques to new weavers.  Her sisters, Debra (θəliχʷəlʷət) and Robyn Sparrow, are a testament to the success of the program.  Debra regularly teaches traditional weaving techniques, including a course on weaving at Langara college.  Debra and Robyn’s weaving can be seen at the Museum of Anthropology and the Vancouver Airport.

“The [Squiamish Lil’wat] Cultural Centre has been a huge part of reviving this art. The weavers are calling them revival blankets because weaving has not been done in this magnitude for over 100 years now.” -Chief Janice George

Courtesy of the Vancouver Art Gallery.

MOA in Conversation with Debra Sparrow

Pride in Poco
Scroll to top