PoCo Heritage acknowledges that our museum is located on the traditional, ancestral and unceded territory of the kʷikʷəƛ̓əm (Kwikwetlem First Nation). We thank the kʷikʷəƛ̓əm who continue to live on these lands and care for them, along with the waters and all that is above and below.

Why is it important to do a land acknowledgement and what does it mean to be ‘unceded’?

Land acknowledgements recognize the deep and enduring connection between the territory where we live and the people who have called it home since time immemorial. The kʷikʷəƛ̓əm have lived on their ancestral, unceded, traditional lands since time out of mind and this includes the area that is now the City of Port Coquitlam.

Most land in British Columbia was taken from First Nation peoples without an agreement or treaty and this is true of the land in and around what is now Port Coquitlam. This is what we mean when we say “unceded”. We want to recognize that these lands were taken without the consent of the kʷikʷəƛ̓əm people and that they have never relinquished their title to their land. If you would like to learn more about land acknowledgements and kʷikʷəƛ̓əm territory, we encourage you to read their own words here.

Museums and similar institutions have deeps roots in destructive colonialism that territorial acknowledgements alone will certainly not undo. We at PoCo Heritage are committed to working to right these wrongs where possible through partnership with Kwikwetlem First Nation and other Indigenous groups to elevate their voices. We have worked in partnership with Kwikwetlem First Nation and the City of Port Coquitlam to produce a series of interpretive panels called Port Coquitlam’s Historical Continuum that invites you to explore the natural and cultural history of our community. You can view these panels, including several written by Kwikwetlem First Nation, along the PoCo Traboulay Trail by the Coquitlam River. 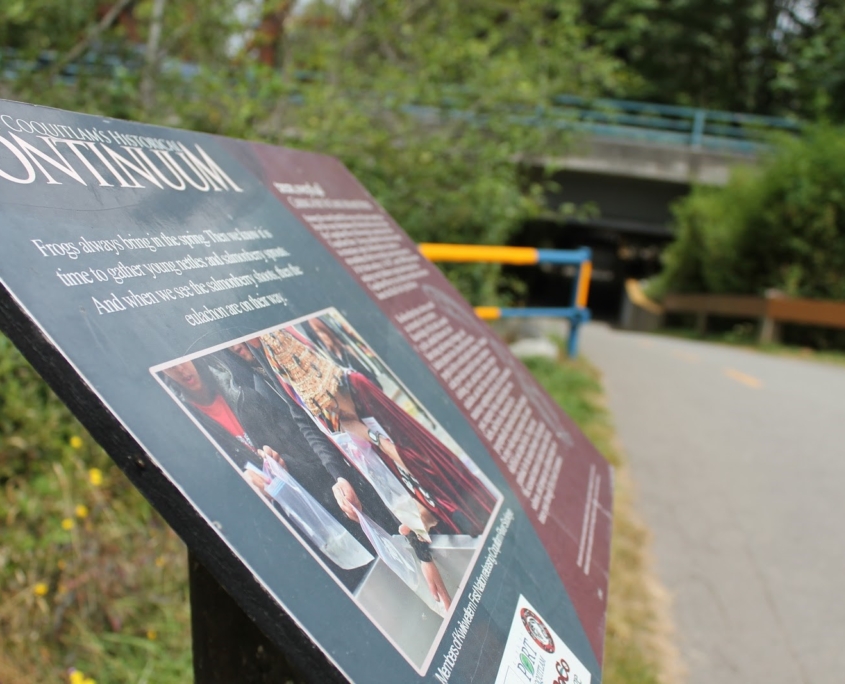